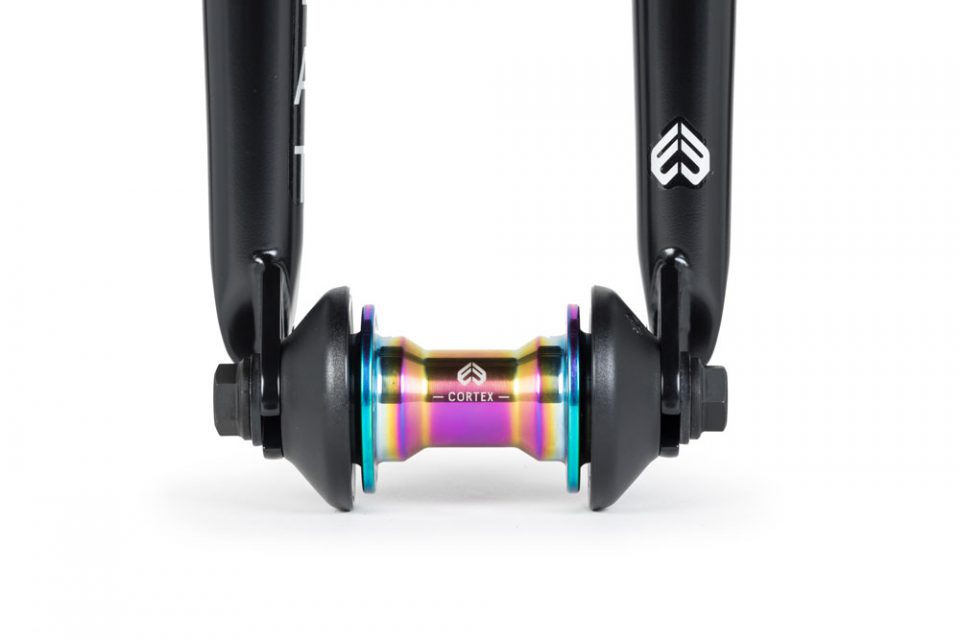 NEW for 2017 is the Cortex front hub. A continuation of our much loved Cortex freecoaster. The front Cortex hub was designed to be a no-nonsense front hub – built to grind, and ready for anything you want to throw at it.

Since the majority of the team was all running our Dynamic front hub with x2 plastic hub guards, it just made sense to create a similar hub that comes with guards pre-assembled and ready to shred out of the box.

Using the same proven narrow flange spacing as our famous Dynamic front hub we designed new nylon fibreglass hubguards which are deeper than most – allowing you to lock into grinds better rather than just floating or rubbing against the flat surface of a traditional guard.

Using the special nylon-fiber mix that we use in our Venom pegs these new guards are incredibly long lasting and they also help keep the price of the hub down to less than you would think since they are injection molded instead of CNC machined. The Cortex guards are fully replaceable and also compatible with the 2017 Dynamic front hub, and older Dynamic hubs (when run with the new cones).

The Cortex uses a super tough 14mm female 4140 heat treated chromoly axle and uses longer 35mm female bolts which ensure there is plenty of bolt thread in the axle even when used with thicker invest cast dropouts and deeper plastic pegs.

Developed and tested with the team over the past year the Cortex front hub is available now – both as a hub, and as a complete wheel laced up to a Bondi XL, Trippin XL, or Polar rim.